I love my audiobooks! I have a one book a month Audible account and have recently signed up to Kobo, where as a member of Good Housekeeping Book Room (a Facebook page), I get a FREE Kobo audiobook each month. The title is pre-determined for me but as I drive a lot, I need an audiobook on the go in the car – so a freebie is a welcome treat!

Currently, I am listening to Mary Boleyn: the Great and Infamous Whore by Alison Weir. I  have ‘read’ it before. I first listened to it several years ago after renting the CD boxset from the local library. I forgot about that when choosing from Audible’s 2 for 1 offer. Nevertheless, I have decided not to return it to Audible and immerse myself in Tudor history once again.

I’ve long been a fan of Alison Weir – I really enjoy her thorough and academic approach, similar to Antonia Fraser – plus she lives fairly local to me (within half-an-hour) and so, to me, she is a ‘local author’.

Mary Boleyn was Queen Anne Boleyn’s sister and was known to have been a mistress of Henry VIII and is reputed to have borne him a child, although if she did he did not acknowledge it as he did with his illegitimate son, Henry Fitzroy, by Elizabeth (Bessie) Blount. Henry VIII did acknowledge a prior liason with Mary during his courtship of Anne, he needed to apply for a special dispensation to marry Anne and declare his past history with her sister. In Tudor eyes, it was within the realms of incest to have intimate relationships with both sisters. It was also rumoured that he had had an affair with her mother, Henry’s response when questioned about the Boleyn women, was unequivocal:  ‘never with the mother’.

A book I finished earlier in the month was The Wicked Boy: the Mystery of a Victorian Child Murderer by Kate Summerscale. This is not the first Kate Summerscale book that I have listened to, I have previously enjoyed The Suspicions of Mr Whicher and Mrs Robinson’s Disgrace. The Wicked Boy is about thirteen-year-old Robert Coombes who murdered his mother in East London in the late 1800s. He was declared insane after the crime and was sent to Broadmoor Hospital where he served seventeen years.

He was released in time for him to travel to Australia and enlist in the Army to fight for King and country in WWI, during which he served with distinction. I enjoyed this story of a boy who lived in a dysfunctional household, sent to an institution as punishment and instead, taught a trade (tailoring) and practised hobbies that would actually benefit him on release (he played several instruments and was a bandsman in his regiment).

Last month I listened to Margaret Beaufort: Mother of the Tudor Dynasty by Elizabeth Norton. I have to say the recording of this was dire! It was of extremely poor quality, like someone reading into a tape recorder from several feet away. Plus, the narrator struggled with the sentence construction on multiple occasions and it was painfully obvious she was out of her depth. I’m surprised the production was completed. 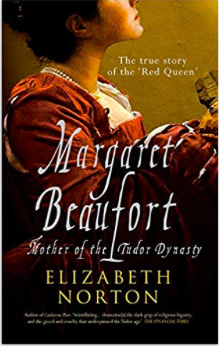 I read a newspaper article earlier this month which discussed the production of audiobooks – it’s a super-swift process with little room for error. When a narrator stumbles over lengthy words or takes a breath during sentences it removes the immersiveness that the listener has bought into, in other words, it’s a major distraction. The usual practice is one take – the narrator continues until they make a mistake. Good narrators read 100 pages per day. Since writing the above critique I thought it prudent to check other reviews – they all say the same as me!

Margaret was a fascinating woman and Elizabeth Norton told a wonderful tale – I just wish I’d bought the paper copy and not the audiobook. I’m surprised it passed quality control.

Other recent podcasts and audiobooks include Putin: Prisoner of Power by Misha Glenny, The Five: the Untold Lives of the Women Killed by Jack the Ripper by Hallie Rubenhold, Elizabeth II: Life of a Monarch by Ruth Cowan, Queen Victoria: Daughter, Wife, Mother, Widow by Lucy Worsely and Rosemary: the Hidden Kennedy Daughter by Kate Clifford Larson.

Do you enjoy audiobooks?

Have you listened to anything good recently?

4 thoughts on “My Latest History Audiobooks”