Last weekend I had the pleasure of visiting The National Gallery, London. I explored the Sainsbury Wing which houses their awe-inspiring Early Renaissance paintings. I was enthralled by their treasures on display, some of which were 700 years old!

The above is a fragment from the Chapter House of the Sienese church of San Francesco. This depiction of serene nuns is one of my favourite images in the gallery it’s a sharp contrast to many of the heavily gilded artworks on display.

This post will showcase some of my photographs and hopefully tempt a few of you to visit. If you can’t make it to London you can visit The National Gallery’s website and take a virtual tour!

The featured image, Crucifix, is from around 1310 – 15. It is of Christ on the cross being mourned by the Virgin and Saint John the Evangelist. Monumental crucifixes were hung above high altars.

I will clarify now, I am not an art historian (or a photographer), the little I learned about neo-classical and rococo art for one module, for a single seminar at university is an almost distant memory, but like a lot of people, I like a pretty picture here and there.

The National Gallery can be found in Trafalgar Square, London. It is free to enter and explore the permanent galleries, additional temporary exhibitions are chargeable.

St Anthony Abbot carries a pilgrims’s staff and book. It is believed this panel formed part of an altarpiece.

I suspect the art resonated with me because I grew up going to mass and having religious iconography and artwork at home and so walking into a gallery heavily filled with religious art, and in particular depictions of the crucifixion, wasn’t an anathema to me. Indeed, I was with my husband, who was reluctant to visit, yet it was fascinating for him, too!

Knowing  practically nothing about art and trends in artistic styles made the Sainsbury Wing the perfect place to start exploring The National Gallery. Rather than being daunted heading out of our comfort zones, it was comforting to be around images that we could recognise and that could evoke memories of childhood.

The Crucifixion depicts Christ on the cross being offered vinegar to quench his thirst. The good thief is being carried to heaven by angels and the bad thief has devils holding a brazier with burning coals over his head.

This altarpiece comes from the Camoldolese monastery (that is now destroyed) of San Benedetto fuori della Porta Pinti, Florence.

The portable altarpiece above, from about 1440, depicts the birth of the Virgin Mary, who is about to be washed, therefore purified. From the left, Saint Joachim is being told the good news by a small boy and, from the right, servants prepare a meal for Saint Anne.

Above, the Virgin is escorted to heaven by angels, doubting Saint Thomas, attempts to catch her falling girdle. Christ is watching her apotheosis along with John the Baptist and their ancestors.

Both Saint Fabian and Sebastian share the same feast day, 20 January, and are often depicted together, as above. 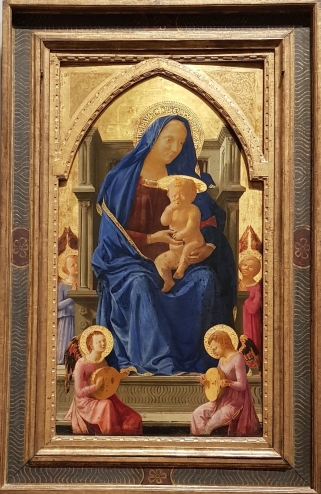 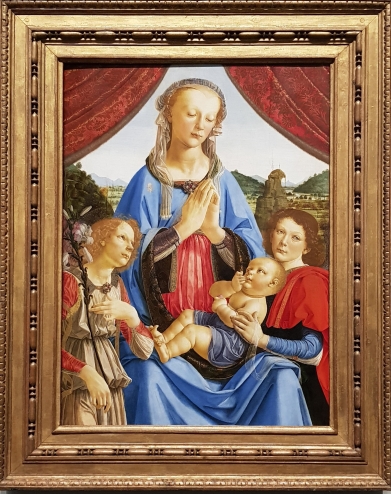 The Virgin and Child with Two Angels, 1476 – 8, Andrea del Verrocchio 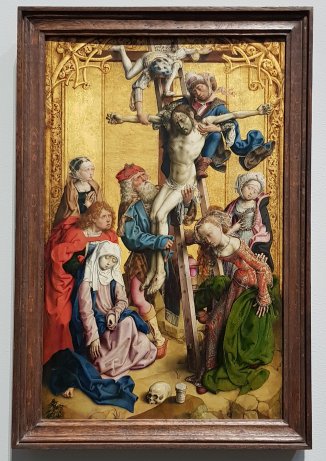 The Deposition, 1500 – 5, Master of the Saint Bartholomew Altarpiece 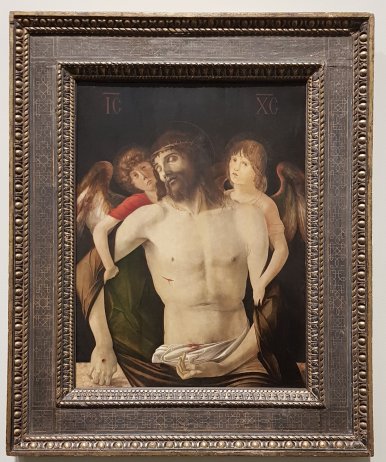 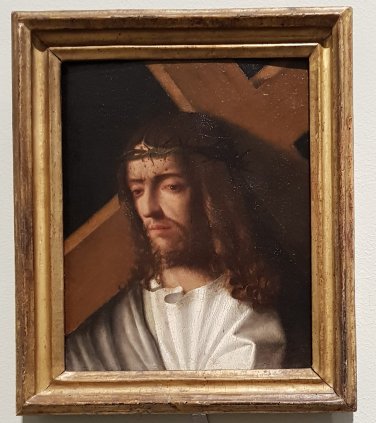 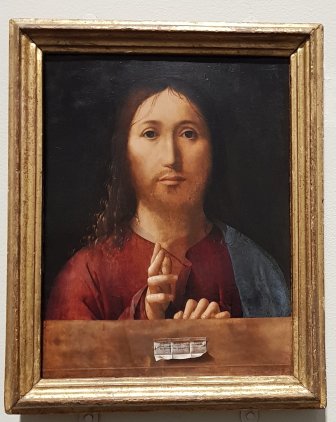 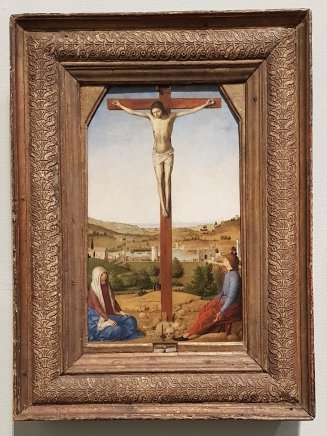 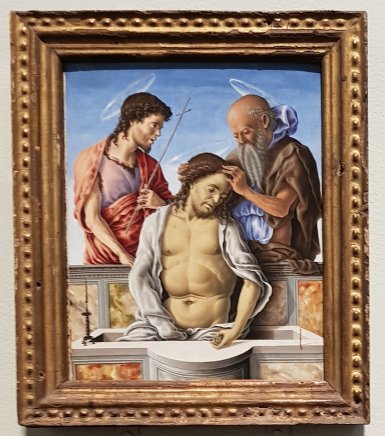 Above the Virgin Mary has been depicted as the queen of heaven, by Sienese artist Fungai. The background portrays images of the Nativity.

For those interested in a more secular aesthetic, the gallery did contain a relatively small number of non-religious Early Renaissance paintings.

Last weekend’s trip to The National Gallery was just a fleeting visit, but I’m determined to return and view all their collections, exploring beyond the fascinating Sainsbury Wing.