As a new monument I’ve questioned whether The Kelpies should be on my history blog. But working on the premise that yesterday is history and indeed, in twenty years’ time this monument should still be drawing visitors, it’s made the cut.

The Kelpies are a landmark feature of The Helix Environmental Regeneration Scheme on the Forth and Clyde Canal near Falkirk, Scotland. Designed by sculptor Andy Scott, The Kelpies are based on the mythical water-horse that was as strong 100 horses combined, they were unveiled in 2014 and represent the industrial heritage of the area. 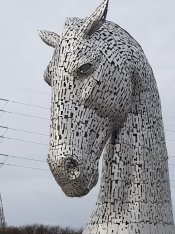 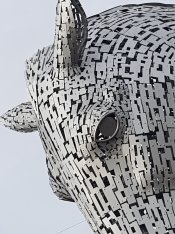 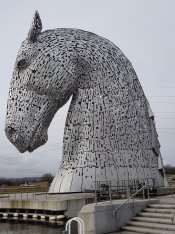 Scott modelled his design on the working heavy horses, Shires, Clydesdales and Percherons that were used in the industries of the Falkirk area which pulled carts, ploughs, barges and coal ships. At 100 foot tall they are the largest equine sculptures in the world.

I was impressed with the vivid musculature depicted from the stainless steel jigsaw like components, the beauty and the detail in the horses faces and how rigid metal could make manes look like flowing horse-hair when looking at the beasts from the rear.

Andy Scott: ‘I see The Kelpies as a personification of local and national equine history, of the lost industries of Scotland. I also envisage them as a symbol of modern Scotland – proud and majestic, of the people and the land. They are the culmination of cutting edge technology and hand crafted artisanship.’

13 thoughts on “The Kelpies”