I recently visited Hampton Court Palace. It is cared for by Historic Royal Palaces – the charity that looks after HCP and 5 other royal residences in Britain: Tower of London, Kensington Palace, Kew Palace, Banqueting House and Hillsborough Castle.

I’m lucky enough to live a short drive from Hampton Court Palace, in fact I volunteered there four years ago for a few months after spending the 2013 season volunteering at Kew Palace.

I visited the Young Henry exhibition, which highlights the younger years of Henry VIII, rather than the years where he became known for divorcing and beheading his numerous wives in the quest for a male heir.

Entry to the exhibition is from Base Court, through a sixteenth century arched doorway and up a tight spiral staircase, which is very atmospheric and adds to the intrigue of exploring a five hundred year old building, but not so easy for those with disabilities or using pushchairs with small children – but exceptions are made with access rights in historic buildings. You can read what HRP say about accessibility here.

The narrative of the exhibition surrounds the relationship between Henry, Katherine of Aragon (his Queen) and Cardinal Thomas Wolsey, Henry’s chief minister and trusted ally. As we traverse the Tudor rooms at Hampton Court we are met with three modern thrones and chronicled in each is the story of the triumph and the tragedy of our three protagonists.

As the exhibition expands we have the pleasure of tracing Cardinal Wolsey’s footsteps in his private apartments. In Tudor times these would have been magnificently decorated and would have ‘amazed visitors’, they were also intended to ‘influence and control’. Hampton Court was a ‘labyrinth of spiral staircases and gilded chambers’, made to impress and to convey power.

The story begins by telling us Henry VIII became King of England in 1509 and that he was charismatic, tall, athletic and confident. He had ‘golden hair and a beautiful new wife…He wanted to be the most influential and impressive prince in Europe’.

The next chamber tells a little of the ‘complicated’ Tudor family tree and that Henry was never meant to be King. His older brother Arthur was the heir to the throne but had died soon after his dynastic marriage to Katherine of Aragon. This meant that Henry was then the heir. To maintain the alliance with Spain that had been forged with the betrothal, then marriage, of Katherine and Arthur, Henry and Katherine were formally betrothed after receiving special permission from the Pope, as it was unusual to marry a brother’s widow. You can read more about Arthur and Henry here.

We are told about Henry VII, Henry VIII’s father and have visual representation in art, like the painting shown which depicts Henry VII declaring before God and St George to look after England. 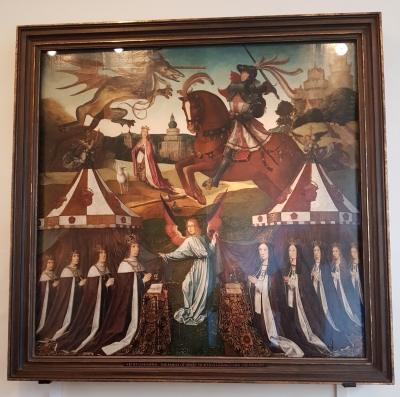 The exhibition continues in sumptuous wood-panelled chambers and we learn that young Henry VIII left his wife, Katherine of Aragon in charge as Regent while he was waging war against France. She had to defend England against an invading Scottish army. The Scottish were defeated at Flodden Field on 9 September 1513. King James IV of Scotland died in the battle and an estimated 10,000 Scottish troops died. The interactive exhibition allows you to hear ‘Katherine’ reading a letter to Henry glorifying the bloody victory. 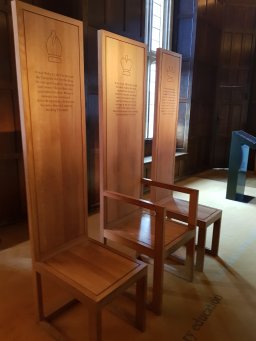 More thrones tell us that Henry’s duty was to lead his nation to glory, mirroring his royal ancestors, while Wolsey took pride of place as his facilitator arranging supplies, transport and money. ‘He was soon the most powerful man on the King’s Council’. Katherine, meanwhile, was dutiful in her support of her husband and was schooled in being a royal consort from a young age. We are told that Katherine and Henry were a ‘team’. Henry’s diplomatic career saw him allied with Emperor Maximilian I, Holy Roman Emperor and head of the powerful Habsburg family. Later, in 1520, when relations improved, we can visualise through artwork displayed, Henry’s court travelling to France to meet King Francis I.

In a room resplendent with linen-fold wood-panelling, Henry VIII’s modern throne tells us of his longing for a male heir and his and Katherine’s despair at the failure to produce a prince that lived. This would have bolstered the fledgling Tudor dynasty that was only thirty-three years old in 1518, the year that their last pregnancy ended in another tragic stillbirth. Katherine’s throne tells of their one surviving daughter, Princess Mary. A blocked off doorway informs starkly of the sad eighteen-year maternal history of Katherine of Aragon, who was a proud Queen who did produce one female heir, but she was not considered enough as female rulers were ‘relatively unknown’. 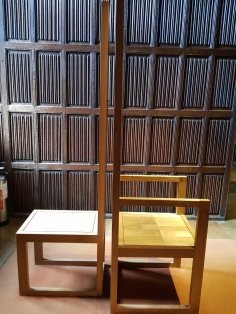 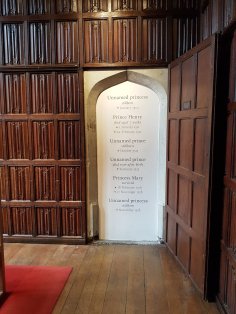 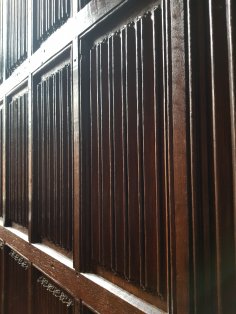 The personal drama heightens towards the end of the exhibition as Katherine, always devout, reached forty and the chance of princes reduced to almost nothing. She withdrew from public life and spent much of her time in prayer.

But Henry then met Anne Boleyn and fell in love. Convinced God was punishing him for marrying his brother’s widow he pressed for divorce from his wife of twenty years. Wolsey failed in his efforts to get the Pope to agree and in 1529 he swiftly fell from grace. 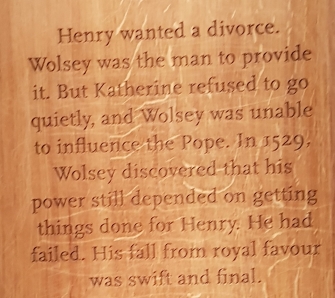 Henry VIII’s early years justifiably deserve remembering alongside the later years, when the quest for an heir overshadowed his early achievements and the divine right of kings ensured absolute power reigned.