6 February 2018 marked 100 years since the Representation of the People Act. This afforded nearly all men, and women over thirty who met property requirements, the right to vote in Britain.

The Act was a huge paradigm shift for British democracy and can be seen as a victory for both the suffragette and suffragist campaigns. The distinction between the two separate campaigns led by Emmeline Pankhurst of the WSPU and Millicent Fawcett, President of National Union of Women’s Suffrage Societies (NUWSS), was that the suffragist campaigners preferred dialogue and peaceful diplomacy over rowdy protests and criminal acts to gain publicity for their joint cause. Militant agitation was suspended by the Women’s Social and Political Union (WSPU) at the start of World War One in 1914.

Fast forward 100 years and the women who gained notoriety and criminal records for berating politicians, chaining themselves to railings, arson, bombing and breaking windows; leading to prison sentences, hunger strikes and force-feeding are viewed through the scope of history as heroines of their age, feminists and not as viragos and terrorists.

Hampton Court Palace celebrated this anniversary with an interactive experience; ‘Vote 100 – The Palace Under Attack’. I joined this event on Sunday 4 February 2018.

Visitors were to meet the tour in Base Court, behind the Great Gatehouse. Then, actors dressed as Edwardians entered Base Court and the audience (including me) were suddenly in 1914 and expected to play along. We were welcomed by the ‘Superintendent of the Works’, Mr Preedy, who told us that the wooden doors we walked through to enter the Palace are original and are 400 years old [in 1914].

Joining Preedy, is a Mr Creighton, whose mother resides in the one of the Palace’s grace and favour apartments. It was revealed that there were two hundred grace and favour apartments at Hampton Court, homes that were given rent free to people who had given great service to their country. A reoccurring trope during the live performance is that his mother is a bit of a martinet, who complains at the earliest opportunity, ensuring that characters can come and go during the performance.

Three of the players at Base Court at Hampton Court Palace

Two gentlemen were chosen from the audience to accompany the tour as ‘constables’ – they had to wear white armbands and were to watch for anything untoward happening. This had parallels with other institutions who employed men to guard against attacks from suffragettes. They accepted their new-found status graciously with, I’m sure, a little embarrassment and were comically slow at keeping up with the storyline and tour at times. All good fun!

Two Edwardian ladies then entered a minute or two apart, both a little late for the tour, they were apparently strangers. One was known to Mr Creighton, the other didn’t introduce herself but proffered a ‘letter of permission’, a reference if-you-like, that unaccompanied ladies needed to carry as institutions, such as the British Museum we were told, were refusing entry to women who wished to view exhibits without gentlemen to ensure their behaviour was as genteel as society expected. Or indeed, groups of women, who may turn out to be the dreaded suffragettes out to damage its artefacts. Women, when entering such establishments would sometimes be requested to leave behind their coats, bags and that most essential of Edwardian accessories: the muff, excellent for hiding a hammer for the latest window smashing escapade.

Mr Preedy explained to the tour that buildings such as Hampton Court were under threat since the Pavilion had been burned down at Kew Gardens and the Jewel House had been attacked at the Tower of London and that was a fortress!

Hampton Court Palace is described by Historic England as one of the most ‘significant and best preserved royal palaces in Britain. The site is of paramount historic importance and Henry VIII spent more resources on Hampton Court than any other royal palace.’ It was also the birthplace of Edward VI and many of Henry’s queens lived there.

Public opinion had been polarised by the long debate regarding women gaining the vote. There is little wonder then, that the threat the militant suffragettes represented to the treasures held within caused much alarm. In the light of suffragettes slashing paintings at the National Portrait Gallery during 1914, their fears were not unfounded. Our Edwardian female had her reference checked and was good to join the tour.

Edwardian lady number one interrupted Mr Preedy once or twice to ask pertinent questions regarding the architecture of Base Court. We were told that although the windows of the Tudor rooms that surround Base Court look authentic, Oliver Cromwell, during the interregnum period, destroyed the original stained glass windows, those in situ are replacements from the 1840s. At the juncture, Mr Creighton intimated that he was worried about his mother who had seen several ruffians lurking about and wanted someone to shoo them away. Creighton headed off to see his mother.

We were told that successive monarchs made adjustments to Hampton Court as wear and tear on the fabric of the building and fashions demanded and were directed to view the crest of George II from 1732. Via Clock Court we were taken towards the impressive baroque section of Hampton Court, built by Sir Christopher Wren in the seventeenth century, for the tour to continue in William III’s State Apartments. We had to climb the stunning trompe l’oeil King’s Staircase. Painted by Antonio Verrio, the Victory of Alexander over the Caesars represents William’s victory over Catholics in the Glorious Revolution. Mr Preedy then informed us that there are 29 nipples visible in this artwork – but I think we were back in 2018 for a moment as it would have been most un-delicate to state such a thing in public 1914! 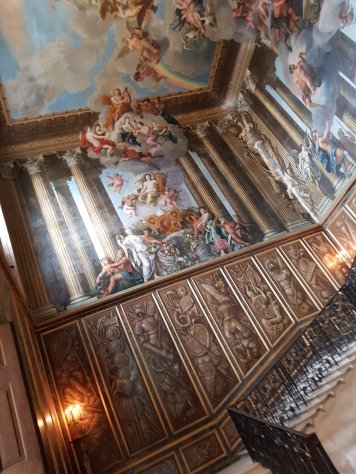 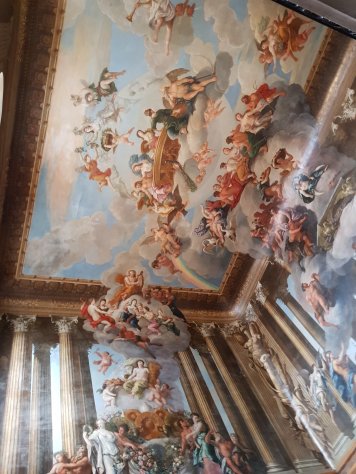 In William III’s Apartments we were led into the very masculine King’s Guard Chamber decorated with weaponry all around the high-ceilinged room. Mr Creighton then returned to request Mr Preedy visit his mother to discuss the disturbances she had had throughout the day. Preedy then departed to visit the ever-demanding Mrs Creighton. Our tour continued into the King’s Presence Chamber, the throne room, where Creighton revealed his duplicity, without the ever-watchful Preedy, and confronted Edwardian lady number two whom he had recognised as notorious suffragette Kitty Marion! Marion had been imprisoned for burning down the grandstand at Hurst Park Racecourse. Creighton declared himself a suffragist, but deplored the militant agency of the suffragettes whose acts of vandalism were repeatedly in the news.

A robust debate began with Edwardian lady number one declaring that she was an anti-suffragist, against females gaining the vote, as men and women had separate spheres and men did all that was required outside the house and the women looked after the home and so it just wasn’t necessary. Women in the audience supported Kitty Marion in her quest for equality with men and argued that if women had to pay taxes when working then they should have the vote, too. Marion informed us she had suffered the ordeal of force-feeding over two hundred times for the ‘Votes for Women’ campaign. She then gave an impassioned plea to be allowed to continue with the tour as she had only intended to have a pleasant day.

The audience’s input was needed, what did we feel about women, such as lady number one not wanting the vote? The debate became quite heated at times. And what about Kitty Marion, number two? Should we allow her to continue? But just as we all acquiesced to her request, Kitty Marion collapsed a little and Creighton and lady number one helped her to a seat. Looking for smelling salts in her small velvet bag they discovered rags, matches and ether! A fire starter’s kit! The constables were called to stand guard, only they had forgotten that they were constables and looked slightly bewildered at being spoken to harshly, before jumping to attention when they realised that they were caught off-guard!

With this, Kitty Marion had to confess that she had intended to hide on the tour and light a small fire when the visitors had left for the day. But, she implored us to understand, she hadn’t intended to injure anyone, it was a bold statement to show the government that women couldn’t be silenced. The floor was opened for debate again and Mr Creighton left the chamber for us to discuss our options, which were holding Marion against her wishes until her arrest by the police or letting her escape, many in the audience called ‘run’!

But then the debate grew heated once more and one woman declared that the suffragette should be punished for her intended crime and a young gentleman, referring to Emily Wilding Davison’s death at the hands of the King’s horse, agreed. Holding a democratic vote we declared that Kitty Marion could leave a free woman. Creighton returned and Marion stood up to leave, the constables shrugged and stood aside to Creighton’s disgust and were discharged from their duty. Just as Mr Preedy returned from his wasted trip to Creighton’s mother…

What was exciting about this event at Hampton Court Palace was the interaction during the debates held in the Presence Chamber, although I’m sure it was frequently forgotten that we were meant to be in 1914 and we were looking back with twenty-first century perspective. I found the engagement by women especially enthusiastic and one woman, a mother with young children, was in particularly fine form as a debater in countering number one’s argument, she was joined by couple of young female students who were prepared to argue alongside me when the young gentleman declared that Emily Wilding Davison’s actions had killed a horse, ‘a sentient being’. My response, backed up by my new associates, was ‘the horse didn’t die!’ And when he persisted; I repeated, ‘but the horse didn’t die!’ Several others participated in the dialogue, bringing history to life at the Palace.

Public history is wide and varied and I have been to other similar tours at Hampton Court and they never fail to engage the public. While Hampton Court Palace remains the major attraction and the perfect conduit to the past, for indeed it was the home of the country’s most infamous monarch, its stories are rich and varied and the curators are always looking for new ways to share the histories of past residents and employees. I look forward to my next visit.

HistorianRuby Comment:
Fact or fiction? Entertaining as this was, I’ve yet to see the evidence that Kitty Marion did try and set fire to Hampton Court Palace, but my sources are limited, please let me know if you have the facts! It is known that Kitty Marion was imprisoned for setting fire to Hurst Park Grandstand and it is probable she travelled past Hampton Court on the night of the arson. Geographically and circumstantially it is possible, but I’m unsure of Hampton Court’s poetic license in this instance.

Images Author’s own unless stated

12 thoughts on “Hampton Court Palace: Vote 100 – The Palace Under Attack”