Cesar Picton was born in Senegal in 1755 but was taken to Picton Castle, Pembrokeshire, as a boy in  November 1761. The castle belonged to Sir John Philipps, Baronet and MP for Pembrokeshire. Philipps described his journey to Norbiton, near Kingston upon Thames, where he had a home, with ‘a black boy from Senegal given to me by Captain Parr, a paraquet [parakeet] and a foreign duck’. Cesar, a Muslim, was then christened by the Rev Dr Philipps on 6 December 1761.

In June 1762, Cesar returned to Picton Castle where he was educated and trained in household work. However, there was little need for him to be a servant as Sir John’s only surviving son already had a servant. Instead, he was ‘accepted as one of their own’.

Was Cesar a slave? There is no clear answer to this question. One source I read said he was not a slave, another claimed him a former slave. There are further questions to explore: why did Captain Parr bring him to Britain? Where were his parents? Were his parents slaves? Was he an orphan and Captain Parr took pity on a child who was alone? It is certainly odd to modern eyes that a child can be given to another man. What can be confirmed is that from inauspicious beginnings Cesar Picton excelled in the nurturing home of the Philipps family.

When Lady Philipps died she left Cesar £100, and later her daughters would bequeath money to him, too, demonstrating how well thought of he was by the family. With her death, the family sold their home at Norbiton Place and her daughters moved to Hampton Court.

Cesar rented a house in Kingston and later, in 1788, he was able to purchase it. It was at this time he adopted the surname Picton after the castle in Wales. His former home in Kingston-Upon-Thames is now adorned with a plaque marking his remarkable life as a successful black Briton in an age when there are so few records that survive from the black population.

He later became a successful coal merchant – living in Kingston, Thames Ditton, Norbiton and other areas in the region.

From 1806, Cesar Picton lived in an impressive Georgian house in Thames Ditton that still bears his name, like the Kingston house, it also commemorates his life with a plaque. It records that ‘Cesar Picton Who was brought to Britain from Senegal in 1761 aged six and became a wealthy coal merchant in Kingston lived here 1816 – 1836.’ 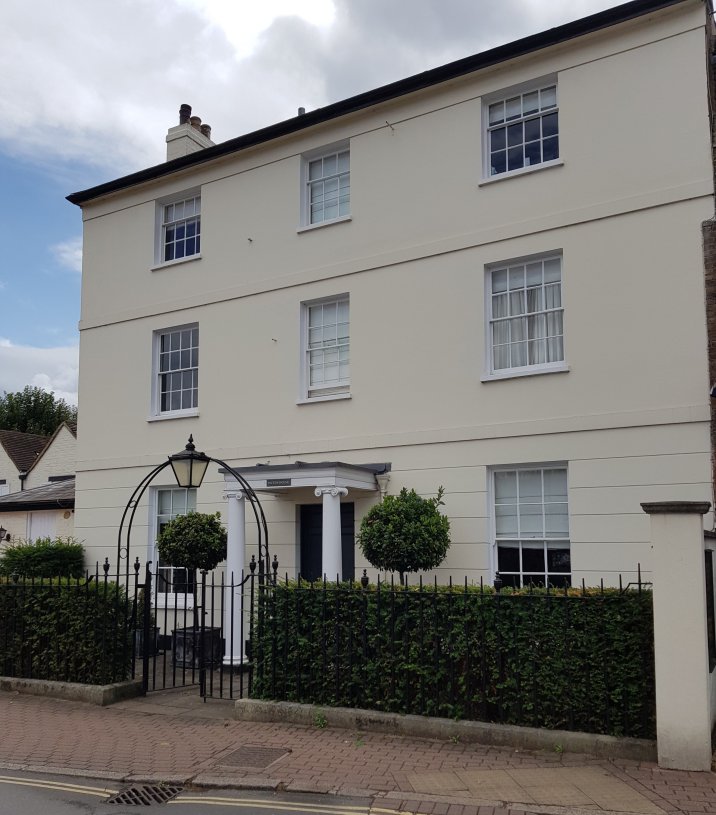 Cesar Picton died in 1836 and was buried at All Saints Church in Kingston, in there you can see a modest memorial plaque ‘C.P. 1836’ in line with his final wishes.

If you would like to read a little more on Britain’s black history click here to read about Thomas West who was admitted into London’s Philanthropic Society in 1793.

Images author’s own unless stated.

15 thoughts on “Cesar Picton: an African in Georgian Britain”