Seated is my grandfather, William James Gray, not to be confused with my uncle of the same name who you can read about here. Nearly every photograph we have of grandad Gray (and there aren’t many), show him seated. He was almost 6 foot 4 inches tall according to his Attestation Paper, although my mother always said he was 6 foot 5 inches. He was often the tallest person in the room and so a chair was frequently the photographer’s friend.

Grandad travelled to America before the First World War and then enlisted in the Canadian Expeditionary Force in December 1917, giving his address as 525 E. 29th St., New York City. The Attestation Papers, signed on enlistment, to which he answered ‘No’ to the question ‘Have you ever served in any military force?’ did not tell the truth, he had served in the Royal Irish Rifles and the Coldstream Guards when younger.

That Christmas he sent his mother, Mary Gray nee Hand, who lived in their small family cottage in Drogheda, County Louth, Ireland, a Battalion Christmas card, that has remained in my mother’s possession.

Inside, season’s greetings were sent from his commanding officers. His personal message to his mother says ‘From Willie to his mother, wishing you a happy Xmas’. 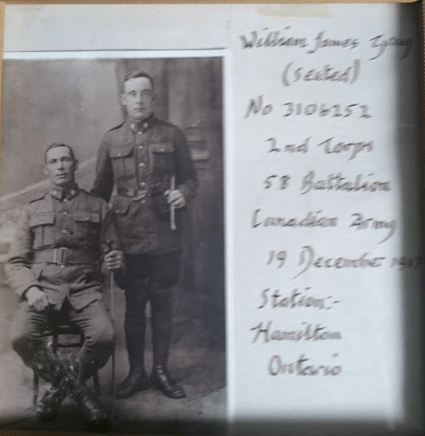 Grandad Gray was born on 29 November 1885 and died 14 April 1941, my mother, the seventh of his eight children was nine-years-old when he died. He is buried in Ford Cemetary Liverpool.

A people, places and stories blog by Chloë