Gold post box dedicated to the host city of London 2012

I bought two sets of stamps as mementoes of the historic games: those of Sir Andy Murray, who won his gold medal after he beat Roger Federer on Wimbledon’s Centre Court. This was after he had lost to Roger Federer on the same court in the final of the Wimbledon Championships only a few weeks earlier. I also bought Sir Bradley Wiggins’ set of stamps. We had gone to Hampton Court to watch the Men’s Time Trials the afternoon of his win. They were my ‘as we were there’ souvenir.

It was a source of national pride to watch Team GB come third on the final medal table with 29 gold medals. The honour was also given to the Paralympic athletes and so Britain now has 110 gold post boxes.

Britain’s post boxes were originally painted green, but they’ve been pillar box red since the 1870s. It is believed to be the first time that the Royal Mail (and previously the Post Office) have changed the colour of the post boxes. They are, according to Royal Mail Group ‘cherished local landmarks’ and after being ‘well received’ by the public the Royal Mail decided to keep the gold post boxes as a permanent reminder of our Olympic winners in 2012.

This pair of gold post boxes is dedicated to Paralympian James Roe in Stratford-upon-Avon.

I must admit being pretty excited to see my first gold post box. It was for Olympic cyclist Joanna Rowsell, in Cheam, south-west London.

I later came across the post box to honour Sir Mo Farah, in Teddington, he also has a gold box commemorating his second gold medal of the games in Isleworth.

Wandering around Edinburgh in the rain I happened across the gold post box for Sir Chris Hoy.

Gold post box dedicated to Olympian Sir Chris Hoy, Edinburgh – note the Scottish crown on the box rather than a royal cipher

Last week I finally visited another box that is fairly local to me, the box dedicated to Sir Andy Murray, near the All England Tennis club in Wimbledon.

The All England Club, Wimbledon, as seen from Andy Murray’s gold post box

I also took a small detour on my trip to Scotland and photographed the Bradley Wiggins gold postbox in Chorley.

A little extra trip to Dunblane (suggested by my husband) to photograph the second Andy Murray gold post box, this one in his hometown. 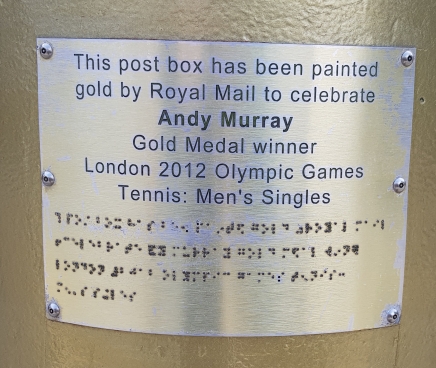