On the morning of 27 September 1950 an RAF twin-seater Meteor 7 aircraft crashed into the Irish Sea, off Strumble Head, Pembrokeshire. It was on its way from Jurby, Isle of Man to Driffield, Yorkshire. An RAF rescue attempt was launched immediately with assistance from those in the vicinity.

It was briefly reported in some newspapers, where it was stated that one body was recovered by the SS Brent Knoll (1,362 tons). The ship transported the body to Port Talbot the following day.

What the newspapers didn’t say, was that it was my father, George Frederick Boyland,  aged twenty at the time, who attempted to rescue the crew of the Meteor.

Defying orders, he heroically dove into the Irish Sea and recovered one man. He was convinced that the ‘pilot-officer’ was still alive when he rescued him, but he died soon after.

We know this through oral history, Dad shared this story on occasion, but also documentary evidence. In June 1953 he received a reference stating that he ‘displayed great courage by jumping into the sea to retrieve the body of an airman after an incident in the Irish Sea.’ I have a copy of this reference in my family history box. 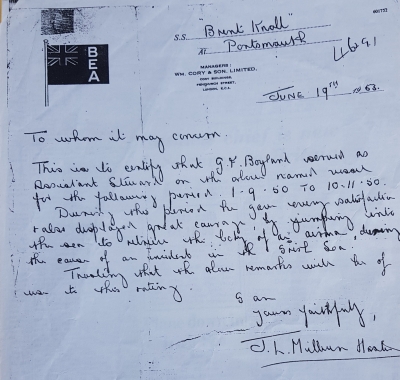 If Dad were still with us he would have been 88 years old last week. He died in January 2006. He is still my hero.