I visited Bath Fashion Museum recently, specifically to see their special exhibition at the Fashion Museum, Royal Women: Public Life, Personal Style that you can read about here.

You can read Fashion Museum: A History of Fashion in 100 Objects – Part One here.

You can read Fashion Museum: A History of Fashion in 100 Objects – Part Two here.

All photos are taken by me unless stated – as is normal for such exhibitions there is a no flash photography rule which can impact any snaps I take, plus the reflection from lighting on glass does cause issues, so there will be some imperfections in the photos. In some cases (in all Fashion Museum posts) I’ve taken a judgement call to post an imperfect shot for the benefit of the article.

Above is a silk satin embroidered gown and train made by court dressmaker, Welborn of Regent Street in 1900. Strict rules of etiquette meant regulations about dress for presentation at court included a rule that the train length had to be three yards in length from the ankle.

Above is a silk wedding dress embroidered with beads and designed by Lucille in 1908. Lucile was Lady Duff Gordon, top London couturier, who along with her husband, Sir Cosmo, survived the Titanic disaster.

Above is a Voluntary Aid Detachment (VAD) nurse’s apron from 1914 and a poignant reminder, amid all the glamour, that garments had to be serviceable. Made from white cotton, with a hand-stitched Red-Cross symbol, it represents increased female agency during the twentieth century. 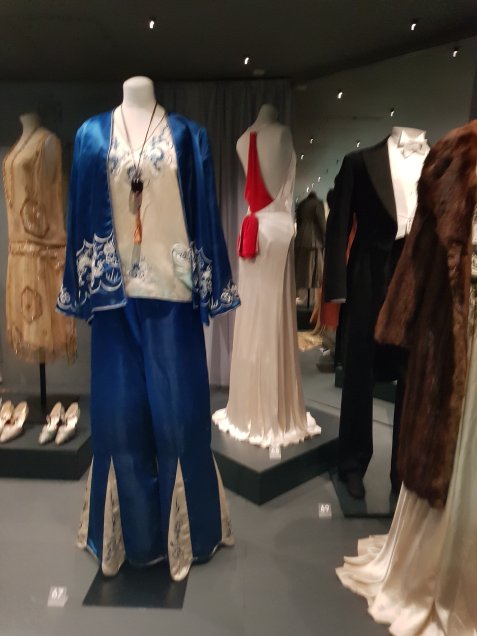 To the left is a pair of embroidered silk satin beach pyjamas, comprised of a sleeveless top, jacket and flared trousers from 1929. Centre rear is an evening gown from the 1930s (rear view). Its crinkle effect artificial silk fabric appears so as the fabric panels are cut across the material rather than on the straight grain. It was made by Donguy of Paris and during this period mass-market clothes were starting to be influenced by styles in Paris.

Showcased above is a silk chiffon drop-waisted evening dress, embroidered with clear beads, floss silk, metal thread and sequins by Paquin, a Paris couturier from 1927. The drop-waisted boyish shape was on-trend in the twenties, note skirts were becoming shorter, too.

The floral print synthetic silk dress, above, was worn by Margaret Allen when she married Lieutenant John Vaughn on 16 March 1940. Wartime constraints meant that fabric was in short supply and women chose to marry in day dresses rather than sumptuous gowns that previously had been an option for those who could afford them. By 1941 clothes were rationed to 66 coupons per year.

Above is a 1958 evening dress by Norman Hartnell worn by film star Elizabeth Taylor. It is made from man-made materials, from the synthetic silk to the synthetic ‘crystal’ beads. The length of the dress is also much shorter during the second half of the century in comparison to the 1910s when it was still risqué to show an ankle.

Front in the picture on the left, is a knickerbocker dress from 1961. It has a linen-look tunic with frilly knickerbockers and was made by Mary Quant. Quant was part of the swinging sixties zeitgeist  and her shop, Bazaar, on the King’s Road, Chelsea, London was hugely popular and the young flocked there for her up-to-the-minute fashions. Rear in same picture is another classic sixties shape form 1965, a cream double-knit jersey shift dress from Yves Saint Laurent worn by Dame Margot Fonteyn. 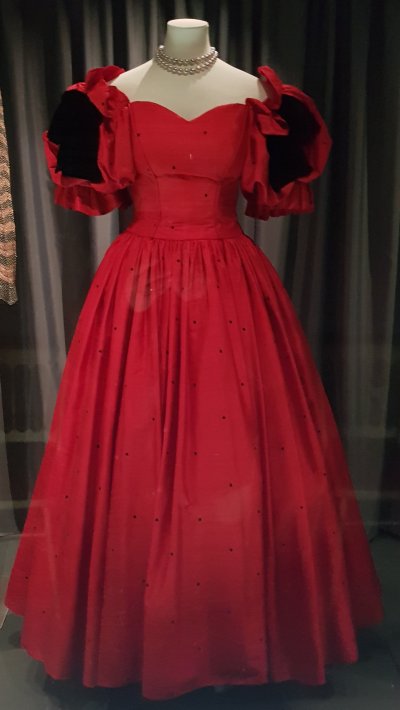 11 thoughts on “Fashion Museum: A History of Fashion in 100 Objects – Part Three”