During my recent visit to Hampton Court Palace I paid a quick visit to their Chocolate Kitchens. They were originally built for William III and Mary II towards the end of the seventeenth century when the Palace was re-designed by Sir Christopher Wren in the Baroque style. However, they were not in full use until the Georgian era. Thomas Tosier was the chocolate chef for Kings George I and George II. He was tasked with making and then bringing the King a luxurious cup of hot chocolate each morning. 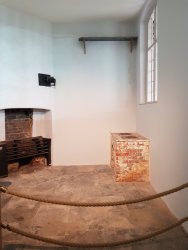 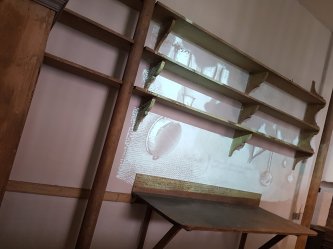 Drinking chocolate in the eighteenth century was an expression of your status. The ingredients to make chocolate; cacao, sugar and spices were expensive and needed to be imported into the country, therefore it was a drink for the rich.

The kitchens fell out of use during the reign of George II as the King no longer wanted to reside in Hampton Court and centred his court at Kensington Palace. Similarly, George III, who was sovereign from 1760, did not enjoy Hampton Court Palace and it was never used as a royal residence again.

The Chocolate Kitchens were hidden until 2013, when one of the curators located them while reading an eighteenth century inventory. Opened in February 2014, they are the only royal chocolate kitchens in the country. All the original fixtures and fittings survive. I was lucky enough to sample the chocolate made from an eighteenth century recipe during the period I volunteered at Hampton Court, which directly coincided with the opening of the Chocolate Kitchens. It was thick and very rich and totally different to modern hot chocolate.

The Chocolate Room, like the kitchen, was previously used as a storeroom. It can be found in the cloisters surrounding Fountain Court. During the eighteenth century you would find the elaborate dishes made from china, delftware, silver and glass that would be used to serve the king chocolate and other delicacies, such as confectionary known as ‘sweetmeats’. Historians believe that the corridors surrounding the Chocolate Kitchens would have been filled with the sound of people working in other privy kitchens and filled with the aromas of roasting cacao beans and flavourings such as aniseed, chilli and sugar to make chocolate fit for a king.

Experts at Historic Royal Palaces recreated the Chocolate Kitchens using documentary evidence and the help of traditional craftspeople to ensure the authenticity of their display. It is dressed quite sparsely, much like the kitchens at Kew Palace, with projected scenes imagining life in the kitchen during Thomas Tosier’s tenure.