One hundred years after the Representation of the People Act, which gave some qualifying females the right to vote in the UK, the exploits of the women at the vanguard of the suffrage movement still capture the the country’s imagination.

Thankfully, we have a robust photographic and news archive that can take us back to pre First World War Britain when the uprising of militant women shocked Edwardian society as they fought for equality with their male counterparts.

Woman suffrage polarised opinions and postcards were used as propaganda. The one below, The Suffragette That Knew Jiu-Jitsu was clearly in support of militancy as the fighting female had the policemen cowering at her skills.

Edith Margaret Garrud – the 4 foot 11 inch tall suffragette depicted in the image, taught martial arts to women and trained them to perform bodyguard duties for Emmeline Pankhurst, the leader of the WSPU.

The postcard above depicts the suffragette as an extremely ugly and indeed, most unnatural woman – which is what those opposed to females gaining the vote believed. Note the purple and green colours of the dress and hat, the colours of the WSPU (Women’s Social and Political Union), formed in 1903, they are seen frequently in propagandised postcards for both sides of the suffrage divide. 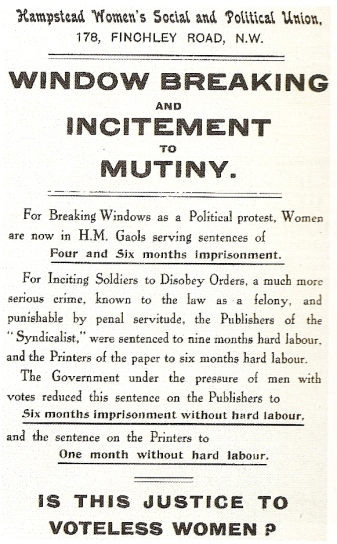 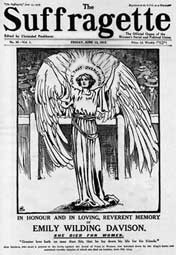 Above papers supporting the right to vote. 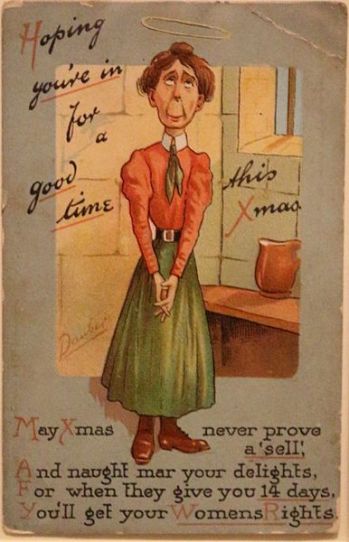 An anti suffrage card. The suffragette is in a cell but has a halo denoting good behaviour c.1908 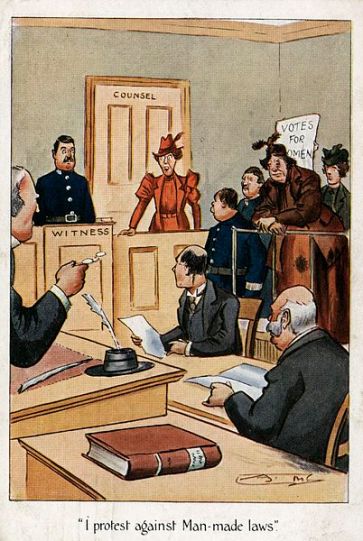 Note the rumpled and bruised suffragette in court

From being figures of hate and mocked by large sections of Edwardian society, the image of the suffragettes has done an abrupt volte face. Rehabilitated by time and modern attitudes, they are now not considered criminals who needed locking up and force fed for chaining themselves to railings, for setting fire to the Pavilion at Kew Gardens or for smashing shop windows, but as heroines of their age who fought for democracy and equality between men and women.

They are applauded for the ingenuity that saw Emily Wilding Davison lock herself in the House of Commons overnight on the night of the 1911 census, ensuring that she listed the House of Commons as her residence that night, and for two ‘human letters’, Miss Solomon and Miss McLellan, that were sent to number 10 Downing Street, the Prime Minister’s residence. 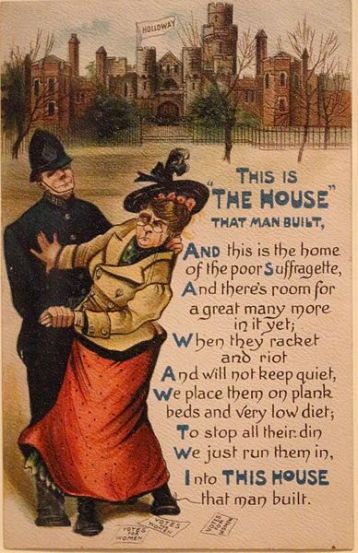 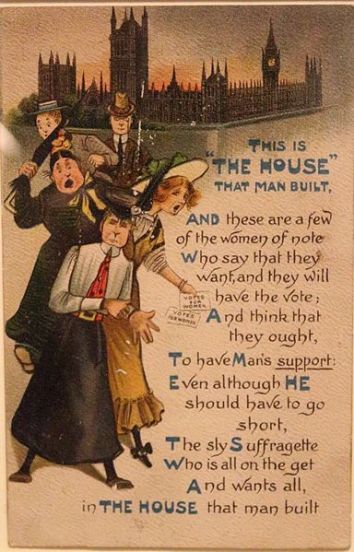 When democratic discourse and peaceful demonstrations failed to procure the vote, suffragettes took control of the situation with their motto ‘deeds not words’ and demonstrated vociferously, for example, haranguing politicians – resulting in Winston Churchill saying that he refused to be ‘henpecked’ by them.

The below postcard portrays a cartoon of a female child dressed as a suffragette. With rolled down socks, dimpled knees, a round face and her hat askew, she is declaring that the suffragette is infantile, which is how women who wanted the vote were perceived. She is waving her green umbrella in one hand (useful for coshing policemen or others who wish to manhandle her) and a rolled up newspaper in the other documenting the fight for the vote. In the pocket of her purple coat she is carrying a hammer (to smash windows) and papers that could be leaflets to hand out while demonstrating in public. She needs a stool to raise herself above the crowd, hence she is standing on a pouffe, again infantilising her. Below her, is a cute cat and a toy policeman, further reinforcing the childish notion of the suffragette. Battles with the police became synonymous with the suffragette, as was the image of the cat.

Emmeline Pankhurst ordered her troops to drop their arms when faced with war in August 1914. Women all over the country had to step up and take roles that were previously considered suitable for men only in support of the war effort proving that they were indeed equal to all men.

If you want to read more about how suffragettes attacked the post in their fight for the vote click here.

If you want to read about Emily Wilding Davison receiving hate mail as she lay dying after colliding with the King’s horse at the Epsom Derby in 1913 click here.

All images from Wikimedia Commons

parenting, married life, homeschooling.. all mixed together with chaos!

A people, places and stories blog by Chloë