Midwifery in the eighteenth-century was transformed from a female-centric activity, with cultural and ritualistic practices, to an environment which saw the customary hegemonic female midwife relinquish her control of the lying-in chamber to the man-midwife.  With the exception of dire emergencies, childbirth before the eighteenth century traditionally precluded men during the processes of labour, delivery and lying-in.

Lying-in lasted a month post-childbirth and was devoted to the mother’s recuperation, during which she remained enclosed in her birthing chamber which ended with ‘churching’.  The ritual of churching was a blessing from the local cleric, usually during Mass, where thanks were offered for the safe delivery of the mother and/or child, after which a woman was purified and could enter into ‘normal’ life again.

The man-midwife, or accoucheur, was a fashionable, yet controversial figure, who entered into the realms of the cloistered pregnant female.  For this, he was derided in public as his role subverted social mores.  The practice was denounced in texts, such as The Danger and Immodesty of the Present General Custom of Unnecessarily Employing Men-Midwives, published anonymously, in 1772.  The perceived ambiguous gender of the man-midwife was mocked in Isaac Cruikshank’s pamphlet, in 1793.  The changing cultural paradigm prompted polarised discourse, with those against calling the practice unnatural, and those for the practice, denigrating female midwives’ professionalism and intelligence. 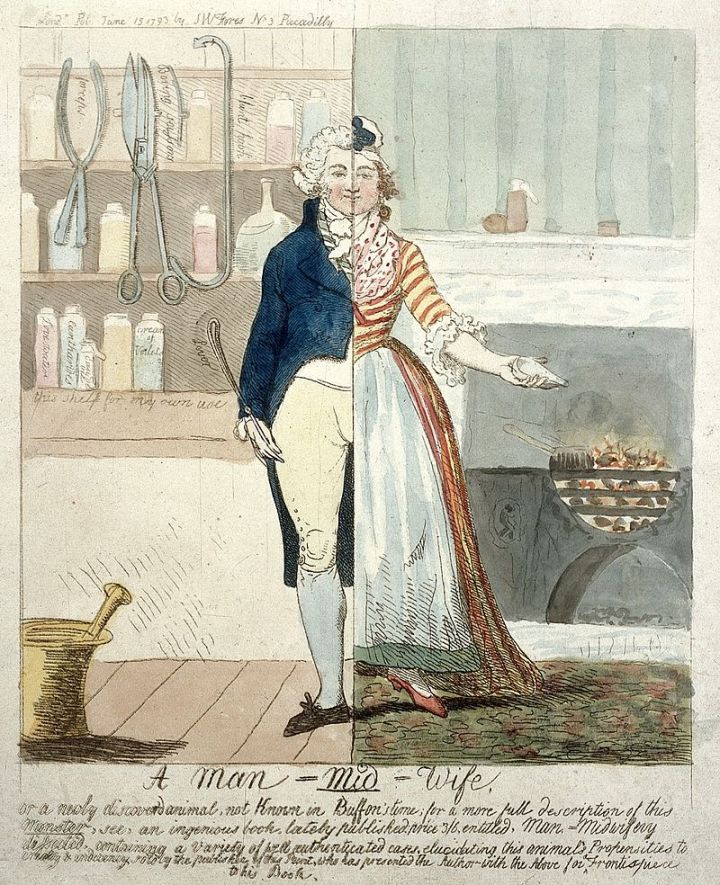 Caricature of a man-midwife as a split figure. Wellcome Images no.L0018481

The Chamberlen family became the most prominent of the male practitioners of midwifery, with at least nine male members practising in England and Ireland.  They tried and failed, to initiate an ‘incorporation of London midwives’ in 1617 and again in 1634. The Chamberlens were central to the invention of forceps, a tong-like instrument, designed to clasp the baby’s head inside the birth canal for extraction during obstructed labours.  They kept their use of forceps a secret for around a century.

Hugh Chamberlen, as well as being a physician, was also a speculative businessman, and when his proposed business dealings failed, his creditors forced him to flee abroad.  With his credibility damaged, he was lampooned in verse in 1699 in Hue and Cry After a Man-Midwife, Who has Lately Deliver’d the Land-Bank of their Money.  It was noted that ‘great belly’d ladies have mighty respect for’ the man-midwife, demonstrating that the fashion for men-midwives commenced in the seventeenth century and was not just an eighteenth century phenomenon.  The verse also alluded to the outrage that was displayed in some quarters by opponents of men-midwives, ‘Among his profession he’s fam’d as a topper, By some call’d a midwife, by others a groper,’ hinting at sexual improprieties that the man-midwife could commit once alone with vulnerable females.

Public suspicion of the medical profession ran deep in the eighteenth century, in part due to the non-secular society believing that decaying bodies tainted the men who practiced medicine, but also, medicine was considered the least prestigious of the professions and the physicians’ failure to cure illness and stave off death impacted the public’s perception of them.  The man-midwifery profession was further disparaged after several eminent London men-midwives supported Mary Tofts, who in the 1720s claimed to have given birth to a litter of rabbits.  The absurdity of their support of Tofts in her fraudulent claim led to professional ridicule.  Not only were the men of the medical profession considered asinine for agreeing with Tofts’ wild claims, there was a growing suspicion of the practitioner as a ‘corrupter of morals, a threat to female modesty and even as a libertine.’

Some historians argue that while a small number of men practised midwifery in the seventeenth century, women still held the majority of rule inside the lying-in chamber and that man-midwifery was highly unusual and indeed, ‘exceptional’.  Many medical men who practised midwifery in conjunction with other duties used the title ‘surgeon’ and this probably obscured their obstetric practices to a large extent.  Indeed, it is apparent that the majority of seventeenth- and early eighteenth century practitioners were surgeons who were called to emergencies to perform surgeon-midwife duties.  By the middle of the eighteenth century specifically trained men-midwives were performing the duties previously only practised by female midwives.  The majority of accounts in diaries and notebooks refer to the surgeon’s presence alongside and adjunct to the traditional midwife, once it was considered necessary to engage a surgeon due to the perceived imminent death of the mother.  The conscious switch from emergency surgeon to pre-booked man-midwife happened around 1750.  It is also argued that the changes in midwifery in eighteenth century England was almost unique in Europe, as other countries did not see men entering the birthing chamber until around 1800 unless they were needed to assist with a difficult birth.

In the polemic treatise The Danger and Immodesty of the Present General Custom of Unnecessarily Employing Men-Midwives, the anonymous author berated both husbands and wives for their choice of men-midwives and argued that this would pollute ‘the minds of the wives and render them easy prey to seduction.’  Doctors were associated with carnal knowledge and from the Restoration the sexual ambiguity of the practice of medicine was highlighted in public discourse with bawdy prints, poems and tales increasingly presenting medical practices as euphemisms for sexual activity, or as masks for lechery. Physicians, courtesy of their medical practice, could dissolve the taboos of normal social intercourse and this left medical men exposed to accusations of impropriety and immorality.  However, physicians were more likely to examine patients by ocular inspection, as opposed to physical contact, which explains why some members of the public protested against men-midwives and their perceived groping of women when they bypassed social boundaries and touched their patients.

The perception of the man-midwife inveigling his way into the domestic sphere was paramount in the objections of many male protesters, as they saw man-midwifery as an attack on husbands’ masculinity.  They denounced men-midwives’ duties as ‘infringing on the husband’, for the man-midwife touched women intimately.   The same objector implored ‘duchesses and countesses etc.’ to ‘show some sense of modesty’ as women of inferior birth were ‘being debauched’ by their bad examples.  Deflecting claims of impropriety, some men-midwives worked blind, practising under bed sheets, tied bib-like around their necks, to obscure women’s genitalia and preserve their modesty.  However, it could be argued that this practice led to serious errors in the lying-in chamber.

Misogynistic treatises continued to besmirch traditional midwifery and author man-midwife Fielding Ould, in 1742, argued that as ‘more learning and dexterity’ was necessary in midwifery practice, ignorant women ‘with their meanest education’ could not be expected to participate.  These were countered by protestations against the practice of men-midwives, as this subverted nature’s rules.  Nevertheless, the polemical treatises against man-midwifery failed to counter the growth in popularity of the man-midwife.  Favourable publicity through printed obstetric treatises by male authors, who denigrated the traditional female midwife and promoted the ‘new’ science of midwifery, word of mouth engagements through masculine meeting places such as coffee houses and judicious advertising, all conspicuously promoted men-midwives’ practices.  Some men-midwives lucratively colluded in supposedly secret births, which resulted from the elites’ extra-marital affairs.  This highlighted the perception of their lack of sexual morals, leading to prurient gossip with the potential to damage their reputations, but ultimately failed to stop their practices.

To assume the wife was under the sexual threat or thrall of the man-midwife, not only disparaged the man-midwife’s personal morals but also promoted the assumption that the wife was weak and sexually incontinent, which can undoubtedly be seen as a continuation of a centuries-old attack on the wife’s gender.  The man-midwife crossed the boundaries of the lying-in chamber and the suggestion that through his practice he committed adultery with the pregnant mother is illuminated in the light of eighteenth century moral codes, as a woman touched by a man other than her husband was perceived as scandalous.  Indeed, whilst the true numbers of illicit relationships in the eighteenth century will remain hidden, only one case of a doctor seducing a patient hit the headlines.

Midwifery in the eighteenth century witnessed the rise in men-midwives as fashion dictated male attendants for the wealthy and aristocratic parturient women, deposing the hegemonic female midwife and labelling her ill-educated.  Men-midwives were accused of impropriety and salacious behaviour, inducing innocent women into scandalous immodesty which devalued their marriage vows.  However, complaints made against men-midwives’ practice failed to dent their popularity and they continued to encroach on the traditional female midwives’ duties.  Largely as fashion dictated for those higher in social standing that the services of such men should be employed.  Disregarding contemporary social standards and using the services of a cheaper female midwife could demonstrate the husband’s perceived lack of solvency, further undermining his masculinity.  The husband, it would seem, was in a no-win situation, unless he was, of course, a man-midwife.

Walter Radcliffe, Milestones in Midwifery; And, The Secret Instrument (The Birth of the Midwifery Forceps (San Francisco: Norman Publishing, 1989)

Edward Ward, Hue and Cry After a Man-Midwife, Who has Lately Deliver’d the Land-Bank of their Money (1699)

Elizabeth Nihell, A Treatise on the Art of Midwifery (London: A. Morley, 1760)

13 thoughts on “The Man-Midwife in the 18th Century”

parenting, married life, homeschooling.. all mixed together with chaos!

Piecing together my family history

A history blog by Chloë